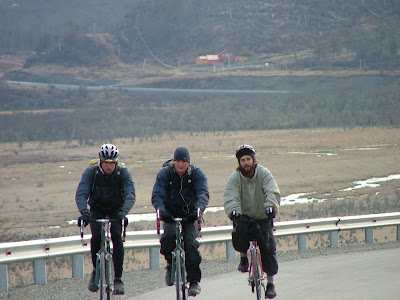 The legs stopped but the crisp rush of air, chilled by a Patagonian winter, continued to bite our weathered faces. Wheels clicked and hummed in their familiar rhythm as we descended Garibaldi pass. Ahead, about an hour was something we knew well from imaginings. The road, once endless, filled with excitement and even dread, was finally running out.

Where once we rode with miles separating each of us, we now closed in to only inches from one another. Each of us, scanning ahead expectantly, took turns making awkward commentary or poorly timed jokes. Soon, however, we quieted.

Lacking any reasonable expression to suit the gravity of this 16,000 mile conclusion, we let silence and inertia carry us forward.

The light was harsh, reflecting off the icy dregs of the Andes, was only broken by the twisted bare limbs of the subpolar forest.

As the sign came into view, a mixture of fear and apprehension ran through me and I physically recoiled in the saddle. This was the finish line. It was the grand finale of a hard fought adventure; a journey that carried with it profound meaning… and yet not one of us felt like celebrating. It was somehow tragic. It was as if our forward momentum was the final throws of a dying dream… but that wasn’t complete it. It was a day that felt largely unremarkable. It seems impossible to believe but it felt that way. Everyday had led to this but and we waited for some great release and it never never came. There was no great joy, no great sorrow and no great epiphany. The breaks squeaked, the wheels slowed and our shoes unclicked from the pedals and dully dragged along the rough concrete. “Welcome to the Southern Most City in the World”. On September 10th, 2006, at 2:26PM we reached Ushuaia and the end.

Later that day we laid the bikes down, took them apart and boxed them up. It was 3am when we finished packing. John was set to leave for New York the next day. Ushuaia was dark and we didn’t need to tell one another what we had been through. We convinced the hotel to sell us a bottle of champagne and we drank the bottle in the empty hotel bar, surrounded by upturned stools. 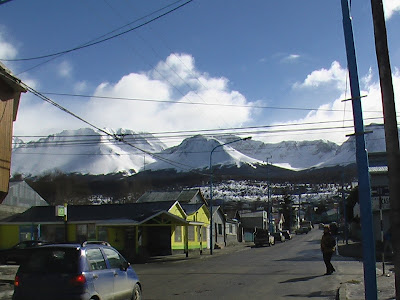